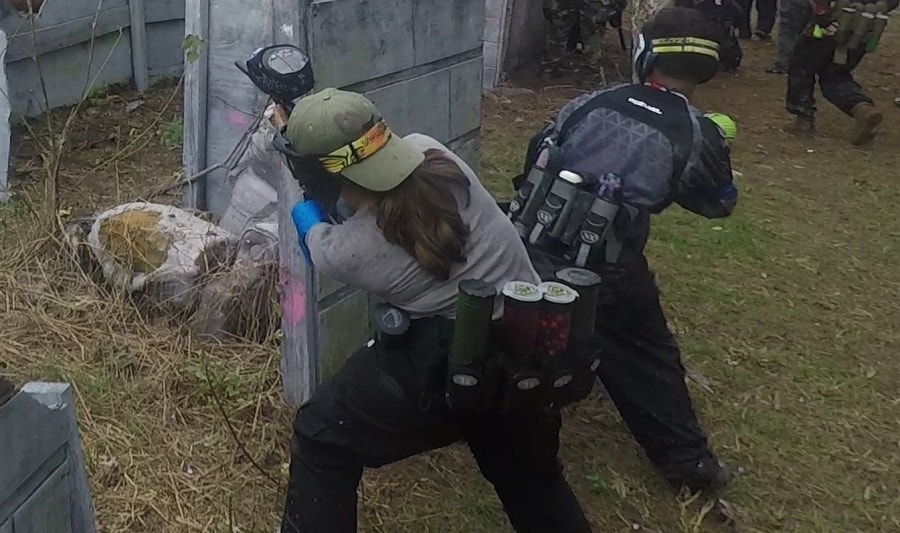 Understanding how you play and how to improve your gameplay is one thing, but how about understanding your opponent? Think about it, if you know how a player is going to act, you can counter their moves and take advantage of the situation. Something as simple as what hand a players holds their marker with will dictate how they move on the field!

Here are some advanced paintball tips that go beyond skill and muscle memory that can really turn the tide of a game. I have slowly learned these over the past two decades from playing against thousands of other players, watching hundreds of games, and paying attention to individual players on the field.

Most Players are Right Handed

Lets give an example of how this can be put to use. If you have played paintball before and moved up to your first bunker what do you do? A right handed player will naturally look out of the right side of the bunker they just arrived at, I know I do.

If a player is looking out the right side of the bunker, where is their immediate blind spot? The left side! Now imagine that 70-90% of the other team is doing just this, that creates a MASSIVE blind spot on the field.

If you are playing a regular walk on game, you can use this to devastating results. Most tournament players will plan out their shooting lanes and know what locations to keep an eye on, but your average player will be a bit more lax on this (even if they are a tournament player).

By simply moving up on the right hand of the field (the other teams left side) you have a higher chance to move up further unnoticed by the other team. Check out the video below for a perfect example of this in action.

Another interesting fact to keep in mind, most right hand players have reduced accuracy, reaction time, and sometimes don’t switch hands when shooting from the left side of a bunker. This can give you that split second advantage needed to put some paint on their lens.

Shoot on the Break

The start of the game is the best time to move up as far as you can, but how can you prevent the other team from advancing further up the field if you can’t get a clear shot?

Most players will stop advancing if they think they are being shot at, even if the paint isn’t landing in their general vicinity. By shooting at the break, you are applying force to the other team and signalling that they may not be as free to move as they originally thought.

If you are shooting at the break, take aim at a bunker that players may run past or near. The paintballs simply hitting the bunker will immediately send a subconscious signal to the opposing player(s) that they have been spotted and need to take cover. If you can find a bunker that makes a lot of noise when you shoot it, it will amplify the effect.

This thought will make them (and sometimes their teammates) stop in their tracks, sometimes at the first bunker they reach allowing you to advance further up the field.

Shoot with a focused purpose and not spraying wildly, or have your teammates do this for you while you sprint for a good bunker. The key here is to intimidate the opposing players and not let them think they have the upper hand.

When you see a paintball flying towards you, the natural response is to take cover. This gives an excellent opportunity for the one who shot the paint to move to a different spot and completely throw off the opposing player.

If the opposing player doesn’t see you move up, they will naturally still think that you are in the same exact location they saw you last giving you the opportunity to sneak up on them.

Sometimes you can actually bait them into staying out in the open or actually attempt to bunker you. Shooting at them and fainting a retreat may lure them into a false sense of security to pursue. You can then either come out the other side of the bunker or have a teammate waiting for the opportunity, and eliminate the player.

One Shot, One Kill, Lots of Confusion

Our ears can pick up sound, but sometimes it takes a second to determine where the sound is coming from. By shooting only one shot and waiting, it doesn’t give the other team the chance to focus in and figure out exactly where you are at. We can use this to our advantage.

Say you see a group of 3 players at just the right angle that they are exposed. If you were to just start unloading and throwing as much paint at one time to take them all out, they will quickly determine your location if you can’t take them all down at once

Instead, take one shot. Not just a random shot, but a well aimed and planned shot at one of the players. If it misses, wait several seconds a try again once they stop looking around for where the shot came from. If you hit one, again wait for a bit until they think it was some random shot and get back into the same positions they were in before.

Basically, if they don’t know where the shot came from and they didn’t get hit like their friends they may think they are safe.

Communicate With Your Team, Even if They Aren’t There

Unless you are doing a stealth mission, constant verbal communication with your team goes a long way. Not only will it help your team to succeed but the opposing players will know that you aren’t alone.

But what do you do when you are alone? You can do the one shot method as stated above, or you can continue to communicate like you are more than one player. This is especially helpful if the other team already knows where you are.

It may feel weird yelling to yourself, but simply making up names, pointing and gesturing at imaginary teammates, while calling out opposing players locations and movements can trick them into thinking that you are a larger force that they need to be cautious of.

This also has the added effect that if you are playing a large scale game, you can attract your teammates as most players during a scenario game will naturally be attracted to commotion.

Pretend That You Are Out of Paint or Air

Players will react when they think they have the upper hand, and when someone runs out of paint or air that is a major advantage. Most people will jump on that in a heartbeat!

If you are running a mechanical marker or can turn off the eyes on your electro, you can manipulate your hopper by quickly turning it off or flipping it upside down and fire some blank shots. When you tuck back in, turn your hopper back on and pop back out to see if the other player decided to rush you and is out in the open.

If you are playing a game where everyone is using 12 gram CO2 cartridges, everyone on the field will know the sound of someone switching out their 12 gram. You can pretend to change out your cartridge by making a similar hissing noise with your mouth and popping out to see if they took the bait.

This tip not only keeps the other teams guard down, but for regular recball and open play can help you just relax and have fun at whatever pace you want.

One thing we do subconsciously when arriving at the field for the first time is survey the current player base to see potential experience level on first impressions. We can tell if a player is is experienced or not simply by how they dress.

You can dress like a rental would (old clothes) and use basic gear that isn’t bright and flashy. Doing this can prevent you from standing out in a crowd and just blend in. This can just calm down the younger and inexperienced players so you can play casually, goof off, and have fun. Plus, the experienced players will have less to assume about you and will be more lax on the field when they see you.

link to Is Paintball Dying? The Current State of Paintball

Continue Reading
link to Is Paintball a Sport or Hobby?

There is a constant debate that has been going on for years, is paintball a sport or a hobby? Paintball itself is one of those few activities that is both considered a sport and a hobby...