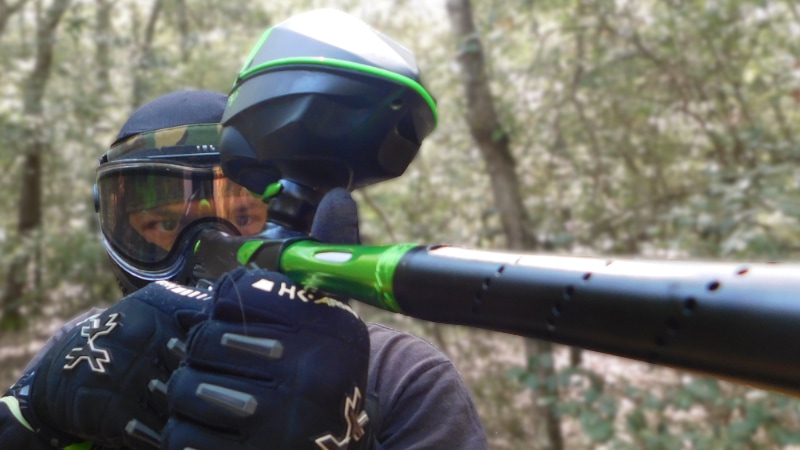 One of the most important skills tor learn when playing paintball is how to aim and shoot your paintball gun with accuracy. The majority of a players accuracy will be dependent upon the player themselves and how they hold their paintball gun.

If the player doesn’t follow those basic fundamentals, their accuracy will suffer and their shots will be less likely to hit their mark.

Basics of Aiming with a Paintball Gun

This is where we have to use the body and barrel of the paintball gun to create a visual point of reference to help guide our shots. This will also require the player to have a consistent and stable way to hold their paintball gun to maintain shot to shot accuracy.

Aiming Along the Side of Your Paintball Gun

Starting off, the best way to aim with a paintball gun that has a hopper on top is to tilt the hopper to the side and align your dominant eye with the body of the marker as shown above.

You will essentially be aiming your paintball gun by looking down the side of the body and barrel so that the back of the body and the tip of the barrel are lined up perfectly with your line of sight as illustrated above with the blue arrow.

Aiming Your Paintball Gun By Pointing

Another easy way to help train yourself to aim is to point with your pointer finger and pull the trigger with your middle finger.

This concept is taking advantage of most peoples ability to point directly at an object without lining their eye up with the side of their finger. I am more than certain that if you were to point at a random object near by you, your finger will naturally point right at it.

You will be able to quickly and easily get your shots close to your target and can use the regular aiming method detailed above to fine tune your shots. The pointing method is a great way to increase target acquisition in fast paced games, but may require time to get use to shooting this way.

Aim With Both Eyes Open

Because paintball is such a fast paced game played at varying ranges, it is highly beneficial to learn how to aim your paintball gun with both eyes open. Shooting this way help speed up target acquisition, judge where your shots are landing to adjust your aim, and increases field awareness.

Players that shoot with only one eye open will subconsciously wholly focus on just the target itself and will have a harder time tracking where their shots are actually landing. This will lead to misjudged distances and poor compensation for missed shots.

Learning to shoot with both eyes open allows for the players to react faster, not only to track their targets as they move but the player won’t have to both mentally and physically transition from observation to shooting. This will let you get your shots off faster and allow you to react faster to incoming fire.

How to Properly Hold Your Paintball Gun for Accuracy

Understanding how where to align your eyes on your paintball gun is highly important, but without a solid and consistent way to hold your paintball gun, your point of reference you use to aim will constantly change.

The Proper Way to Hold Your Paintball Gun

– Tank Pressed Against Your Shoulder

As you can see in the picture above, you have 3 points of contact with your paintball gun for maximum control and support.

Ideally, you will want to rotate your torso to face the target you are shooting at, but this way of holding your paintball gun allows for some horizontal and vertical aim adjustment without throwing off your line of sight and proper aim.

– Tank On Top of Your Shoulder

While this method shouldn’t be used as your go to way of holding your paintball gun, it is useful if you have to play super tight to a bunker and still allow you take aim at your target before clearing the bunker.

The only real difference is the tank is sitting on top of your shoulder and you will rely more heavily on your trigger hand for support. This is also useful if you are using a long air tank and want to reduce the overall length of your setup.

The Wrong Way to Hold Your Paintball Gun

Lets go over a few incorrect ways to hold your paintball gun and how they will reduce your overall accuracy. These are all very common mistakes that beginners will make and will usually complain that they can’t hit their targets.

– Shooting From the Hip

The most common mistake I see people make when shooting is that they fire from the hip. Admittedly, experienced players also do this as well especially if they are tired.

Shooting from the hip prevents the player from being able to actually aim down the sides of their paintball gun and will have to walk their shots in by continuously shooting and adjusting where their shots land.

While it is sometimes just fun to shoot from the hip, inexperienced players are very likely to shoot over the protective nets into spectators and vehicles. If at all possible, don’t make shooting from the hip a habit as it waists paint and increases the chance of shooting in areas you shouldn’t.

– Holding the Paintball Gun Out In front of You

Another major mistake that many new players make is holding their paintball gun out straight in front of them like a handgun. While this would be fine for a smaller and lighter platform like a paintball pistol, a full sized paintball gun is too heavy and cumbersome to hold out in front of you without shoulder support.

While you may still be able to look down the body and aim down the side of the paintball gun, you will lack the solid support your shoulder provides and will be at the mercy of any small changes your hands will make while shooting.

The effect of shooting like this will result in your paintball gun having a constant imbalance between your hands and the barrel tip moving around with little to no control. So in short, you will very rarely hit your target when shooting like this.

Finally, the last common aiming mistake is players holding their paintball gun sideways. This is generally considered to be bad practice, especially if you are using a gravity fed hopper as you will not be able to feed paint into your paintball gun.

Holding the paintball gun sideways may allow for proper support, but you won’t be able to sight down the side of the paintball gun and properly take aim. Plus, with your paintball gun held sideways, a full 200 round paintball hopper will act as a weight and can make it harder to keep a steady shot if you are tired.

The final key trait for shooting your paintball gun accurately is by having a solid shooting stance. This can vary dependent upon the type of bunker you will be shooting from, but the overall concept will be the same.

From my experiences, fully facing your target with both of your feet pointed directly at your target can greatly increase the chance of hitting your mark and reduce chances of stray shots when popping out from behind your bunker.

The go to stance that is the basis for most shooting stances in paintball is called the power stance.

In paintball, the power stance is a specific way you stand and plant your feet so that your lower half is rock solid and supporting your top half that is free to lean side to side and rotate. This allows for a solid shooting base that prevents stray shots and allows you to be ready to move positions at a moments notice.

The ideal power stance has the player standing with both feet about shoulder width apart with feet pointing in the same direction (ideally at your target), and performing a half squat or half sit like you are about to sit in a chair.

If you change your stance slightly, like having your feet point in different directions, it will increase the chance that you will slightly rotate your torso out of alignment when coming out to shoot from behind bunkers.

The power stance can translate directly to kneeling behind low bunkers as well. The theory is the same but instead you plant your legs on the ground about shoulder width apart and face directly at your target.

Now that you understand the basics, it is time to put them into practice!

Before hitting the field, it is a good idea to get some practice in and understand how the paintballs fly through the air at different distances while applying the fundamentals detailed above.

The most common misunderstanding new players have is exactly how far their paintballs will fly and how much of an angle they may have to hold their paintball guns to achieve different distances.

I have found that the best way to practice and understand how much a paintball will drop at different distances is to set up several large targets at various ranges.

Space these targets out in 20 foot increments starting from about 30 feet and go out about 100 feet at the most. Any further than 100 feet may be overkill for practicing accuracy on most paintball fields.

Having multiple targets to chose from at varying ranges is a perfect way to transition from one target to another to practice target acquisition and elevation control.

I also like to move from location to location and practice shooting at the different ranges from behind different bunkers at different angles to get more of a feel and understanding how my shots will differ.

Practice Shooting With Your Off Hand

Knowing how to shoot with your off hand is extremely important for when you need to shoot out on the other side of a bunker without presenting a bigger target to the other player.

It is essentially the same thing as shooting with your dominant hand but mirroring hand positions and what eye you aim with.

Remember, just have fun. Paintball is meant to be enjoyed and there isn’t any need to stress out about absolute precision if you are struggling.