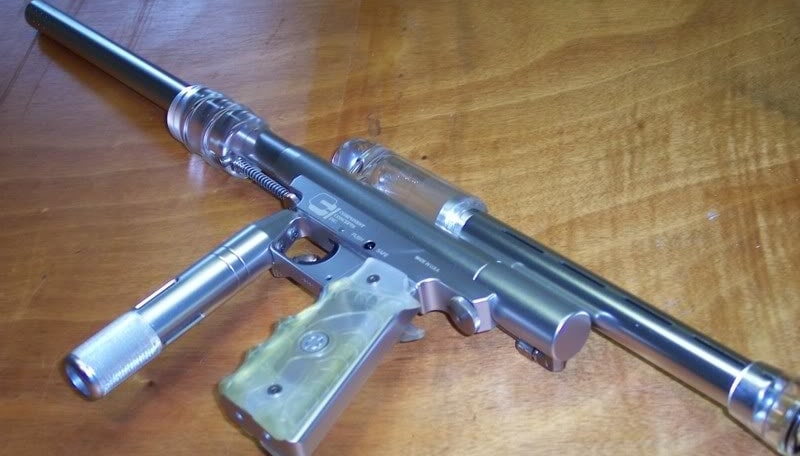 Use a Longer Barrel with More Porting

The easiest and most cost effective way to make any paintball gun quieter is to upgrade the barrel to one with at least 14 inches in length and have a lot of porting. Doing this gives the air behind the ball time and space to expand and dissipate through the porting before the ball exits the barrel.

The barrel that I personally use the most if I want a quiet shot are the GOG Freak Barrels. The barrel tips have a TON of porting in a spiral pattern and will easily reduce the sound signature of each shot. Plus, not only do I get the benefit of a quieter shot, but I have the advantages of having a barrel kit that I can easily change the bore size to the paint that I am using. You can pick up a full kit up on Amazon for a great price by clicking here: https://amzn.to/2qnEqw6

I see a lot of people asking if carbon fiber barrels make you gun quieter. Carbon fiber barrels with proper porting and length will indeed make your paintball gun sound quieter, but it is debatable if it is actually quieter than an aluminum barrel.

I feel like carbon fiber barrels have a bit more of a dull report, but even shooting them side by side with an aluminum barrel of comparable porting and length will be very hard for the human ear to definitively distinguish the difference.

I see more people buying carbon fiber barrels for their paintball guns for the weight savings, the cool design, and that a lot of them come ready for freak inserts. Two of the carbon fiber barrels I like the most are the GOG In-Line barrel and the DeadlyWind Fibur-X barrel.

Both are the newer generations of CF barrels and are made to withstand the abuse of the paintball field and can be cleaned with a barrel swab. For sound reduction I like the GOG barrel, but the Deadlywind barrels are compatible with more paintball guns.
Click the links below to pick one up on Amazon:
GOG In-Line Barrel: https://amzn.to/2JQiRLB
DeadlyWind Fibur-X Barrel: https://amzn.to/2CfemWI

Use a Low Pressure Paintball Gun

Most basic paintball guns like the Tippmann Cronus, Spyder Victor, and Azodin Kaos 2 operate at a standard operating pressure of 800psi and will have a sharp “pop” with each shot. This is mainly due to the valve quickly opening and releasing the full pressure of the air inside the valve out of the barrel. You can reduce this sound to some degree with a nicely ported barrel, but it won’t be super quiet.

Most modern low pressure markers like the GOG XLS, Planet Eclipse Gtek 170R, and Proto Rize operate at less than 200psi. This naturally allows the paintball gun to shoot quieter out of the box than the basic blowback guns. Throwing on a really nice ported barrel will further reduce the sound signature even more!

Now, because your paintball gun is loud doesn’t mean you can’t tune it to shoot quieter. Lots of modern electronic paintball guns can be tweaked by adjusting the settings on their boards, allowing you to play with the pressure settings some

Adjusting some of the settings like dwell time can allow you to fine tune your regulator pressure so you can further reduce the sound signature. Keep in mind, this will require a lot of trial and error plus a bunch of paint before you find the results you are looking for. There can also be a trade off with loss of efficiency when trying to achieve a lower pressure and quieter operation.

Paintball Silencers and Why You Shouldn’t Use Them

I commonly hear people asking if paintball silencers are illegal and if they are allowed in paintball. The short answer is that it is illegal to have one on your paintball gun unless you received ATF approval and payed the $250 tax stamp. This includes homemade silencers as well. Countries outside of the United States may have different laws and should be looked into before getting one.

According to the ATF, ” numerous paintball and airgun silencers tested by ATF’s Firearms Technology Branch have been determined to be, by nature of their design and function, firearm silencers.” Using one without the proper documentation and approval can be considered a felony. So if you really want one, go fill out a form 1 and go through the steps so you don’t get in trouble.

This law extends to the manufacturing and transferring of silencers from person to person. You can make and distribute all the silencers you want, as long as you have the proper documentation squared away.

Even if you get all the documentation squared away, some paintball fields don’t want anything to do with the legalities of silencers and have the right to refuse any silencing device or anything that looks like it could be a silencer. They have the complete right to do so and we as players should respect their decision to do so, even if we went thought the trouble to get one.

Then there is the disadvantages that a silencer (and even a mock silencer) will add to your paintball gun. Some of these silencers are heavy and bulky, making your setup more front heavy and can obscure vision from their bulk. I personally like as much viability around my barrel as it helps with field awareness and improves my first shot accuracy as I can easily see where my barrel is pointing.